Appropriate toys for children. Are war toys acceptable? Toys and Sex Stereotyping. How much should TV and Electronics have a place in a child’s life? Top Favourite Apps. Study on internet addiction in children.

Appropriate toys for children. Are war toys acceptable? Toys and Sex Stereotyping. How much should TV and Electronics have a place in a child’s life? Top Favourite Apps. Study on internet addiction in children

EXCERPT FROM TOYS, TV AND ELECTRONICS

Toys for children have been found in archaeological explorations dating back many centuries. tops, rattles, balls, dolls, miniature animals have been recovered in ancient ruins by archaeologists delving into the history of different cultures.

Many toys are the reflection of the times. They reflect the culture’s industrial progress, weapons and sex roles. During the French revolution, there were toy guillotines. Present day children have rifles, tanks and planes. When trains became a popular form of transportation toy trains became popular. Girls had dolls and miniature dishes.

Even today, with anti-sex stereotyping of jobs, and the sharing of raising children and doing housework, there are still boys-only and girls-only toys.

Generally, war type children’s tv programs and movies are sex typed also. You don’t see too many women in the programs, or in the advertisements playing with war games, bombs, guns and swords. If girls are involved they are usually subservient or in need of male help.

Is it wrong for girls to play with trucks and cars? they will probably learn to drive cars and take care of some mechanical maintenance of them when they get older.

Is it wrong for boys to play with dolls? They will probably be fathers someday and share in raising children.

Since many toys are scaled down replicas found in the adult world, we, as adults need to think about what we want to say to our children by what items we purchase for them.

Through extensive advertising toy companies dictate what they feel boys or girls should play with-boys should have super heroes who are always fighting and killing off enemies. girls should swoon over dolls with hair to comb and have items to cook and clean with. 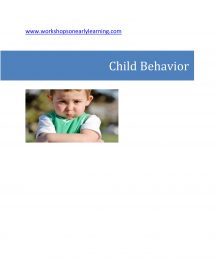 CHILD BEHAVIOUR
As caregivers, whether parent or teacher, we are sometimes quick to judge the behaviour of a child without first thinking of the underlying cause of the behaviour.

We should consider that a young child could be woken out of a sound sleep in the morning, forced to dress and have breakfast, loaded into a car or bus and trundled off to daycare. 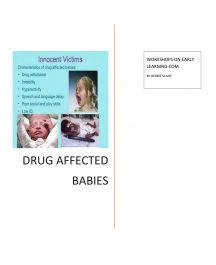 What is Neonatal Abstinence Syndrome? As caregivers we will most likely have interactions with children who were born addicted to opioids(Drugs). In this workshop you can learn What are opioids and what are the signs and symptoms of NAS. What are the most common side effects of drug exposure? Learn how drugs affect pregnancy. Some suggestions on how a child care facilitator can assist in promoting optimal development. 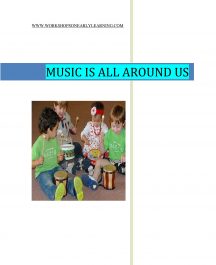 Music is in our everyday lives. What are children learning when they are involved in musical activities and why should children be encouraged to participate in music?

How do you get children to listen?

Percussion and instruments – and how to make some.

How can music help in transition times?